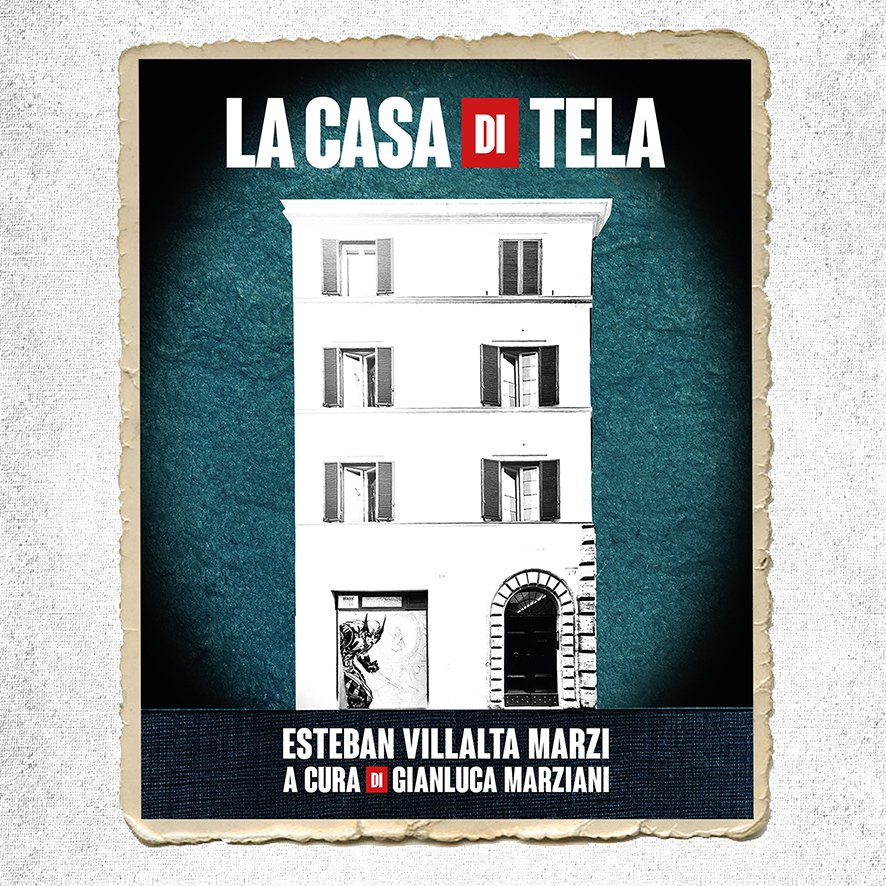 A production by Obra Pía Stabilimenti Spagnoli in Italy

For the occasion of the IV centenary of Palazzo di Spagna, seat of the Spanish Embassy at the Vatican, Obra Pia brings forward the series of social and cultural events scheduled for 2022 with the pictorial intervention "La Casa Di Tela".

Below is an excerpt from the critical text by curator Gianluca Marziani.

The building is located at number 49 Piazza dei Satiri, in the heart of a medieval Rome where the Capitoline Renaissance building style was first seen. The building dates back to the 1500s and was built on the remains of the ancient Theatre of Pompeo (55 B.C.), the underground foundations of which can still be seen today. As soon as you go through the door, the wonder of an "organic" transformation of the municipal interiors can be admired: landings, stairs, walls, lights, rooms, door handles, mailboxes, windows, everything has changed to take on the mimetic appearance of a “total painting”.Esteban Villalta Marzi has broken through the semantic boundary of the canvas to take control of the world to which the canvas aspires, integrating the painting with the life that flows in the shared spaces, dressing the opaque memory of the plasterwork with the images and bright colours of his personal animated pantone.

While the lockdown shut down galleries and museums, forcing exhibitions to take on alternative viewings, EVM imagined the fantasy imprint of the outside world on the building's interior surfaces, like glitter which can transform the unusual skin of the walls into an unexpected and amazing pictorial geography. At the same time, the philosopher Emanuele Coccia wrote "Filosofia della casa" (Einaudi Stile Libero) (in English, Philosophy of the House), tracing a coincidence that can be summed up in this concept: "A house is the moral reality par excellence: a psychic and material artefact that allows us to be in the world better than our nature allows us to be."

PHILOSOPHY OF THE HOUSE

Emanuele Coccia added: "The modern project of globalizing the city has been replaced by opening up our apartments to coincide with the Earth. The house in the pandemic era has thus been transformed into the most widespread human laboratory of life and work, a domestic polis in which the time of rights is intertwined with the time of duties. EVM has captured the most philosophical and conceptual angles, integrating the practice of the atelier with the metrics of the solar cycle, home rituals, fragments of worlds that, deprived of get-togethers, flowed only on social media, drawing global landscapes that have made devices the first liquid universe within the solid world of our homes.

By supporting the operation with the pure logic of patronage, the Spanish institution Obra Pia has combined conservation with creation. Thus, instead of proceeding with neutral restoration, Obra Pia has supported ideational renovation, leaving great freedom to EVM. Let’s not forget that the artist has spent his life in this building, first in the attic where his daughter was born, now in the house-studio where he grew up when his father Mariano Villalta, acclaimed artist, lived and worked in those rooms on the first floor. Obra Pía thus confirms the quality of its philanthropism with a courageous operation that accepts the challenge of the contemporary world. Investing resources in such a complex historical moment, in the city with the world's greatest cultural heritage, means taking up the weaving of our time. In this way, the need to preserve is renewed in a creative cycle that adds and modifies, in ways that best embody the right dialogue between the ancient and the contemporary. The final message is very clear: Rome's ancient treasures must be protected with care but also with the courage to represent the present, creating exchanges where possible, revolutionizing if necessary, harmonizing the roots with the blossoming of the near future.

On the ground floor we are greeted by two large canvases that mirror each other, two opposing guardians watching over the threshold of wonder. On the left is the heraldic coat of arms of the commissioner - the Spanish institution Obra Pia - in a typical EVM pop baroque style. On the other there’s an expressive hand that seems to be bouncing the brightly colored virus and overturning the dramaturgy of television in a lysergic apparition that avoids realism, making the invisible legible, emphasizing the Eucharistic gesture of the hand and making microscope biology more "human".

Both Omar Calabrese in his essay "Caos e Bellezza" and Gianluca Marziani in the book "Gestualidad pop 2015" have spoken of EVM.

Comics, Art, Cinema: three visual models of storytelling, three languages that build stories which pick you up and make you fly in the cyclical hope of a new tomorrow. EVM connects these three moments in the orchestral modulation of La Casa di Tela: the result envelops us like a vertical amniotic sac, an ark of wonders in which colors and figurations become assonant organs of the total pictorial body.

The floors of the building were mapped by EVM with a rhythmic representation of its primary colors. Each zone is characterized by a different color, each one with a strong impact: yellow, purple, red, green, sky blue, they all represent the pantone with which the artist rethinks the world and its fantastic adventures. The colors become emotional geographies, states of mind that divide up the walls to accommodate the three characters and the many details that outline the project. Imagine the surfaces as backdrops from which narrative windows emerge, different moments that trace interior stories with a cinemascope view. It seems that the three characters are ready to go out into the streets of Rome, to do the jobs that life and their roles have given them, transforming themselves, for a long night-time moment, into the "normal" heroes that people need. 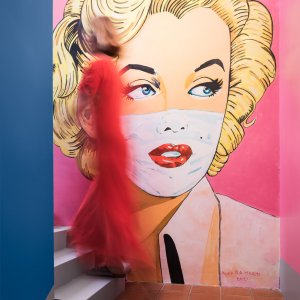 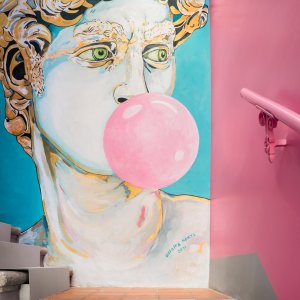 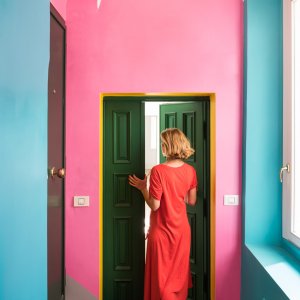 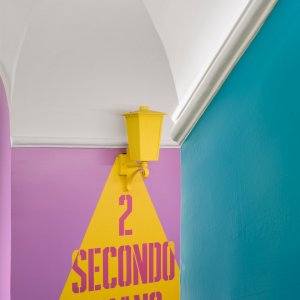 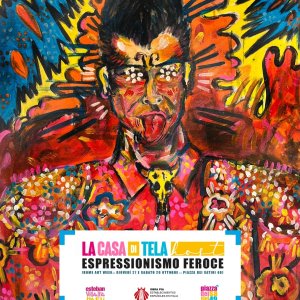 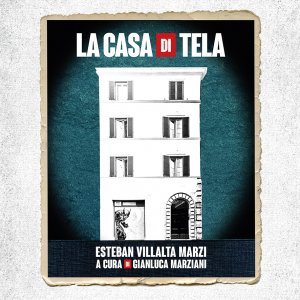