Exhibition of sculpture and painting in Monti 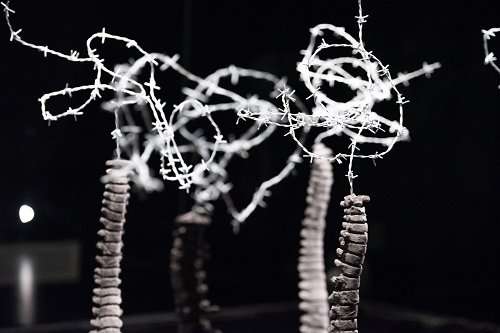 The exhibition consist of two different works with a common subject: the internal representation of the human body focused in feeling an emotion or trying to do something. IL SOPRA DELLE NUVOLE (Radiografia di un Sogno) Francesco Petrone’s work, is the very extreme representation of a group of human people watching the sky seen trough them like an X ray machine. REFERTO CINICO, made by the artistic collective O/tré/, deals with the relationship between container and contained.  The contained materia, changing of state from the solid state to the liquid ones, is depicted in the leak from the container physical limit.

The sculpture made by the artist Francesco Petrone ( Foggia, 1978) is in concrete and barbed wire. The concrete, symbol of  the abuse on nature, is ennobled and made poetic. This piece was conceived for the permanence of the artist in the atelier of Macro Asilo in Rome. Men held up by a bone structure,  a series of  spinal columns that prove their presence, portrayed from the inner  in a moment of suspension between materia and spirit. The light draws on the background the transition between presence and absence.

O/tré/, the artistic collective at its debut, presents a triptych in wich human  bones contains organs melting away. The materia is incessantly dematerializing. The irreversibility of the process set the observer in a condition of impotence  and inevitability of life.