Roberta Pugno was born in Bolzano, she graduated in Literature and Philosophy with Carlo Ginzburg. Her exhibition activity began in the mid-1980s. You have to your credit over sixty personal, more than one hundred and fifty collective and fourteen catalogs. Since 2010 she has been the artistic director of the Ipazia Immaginepensiero Odv Association. You are among the editors of the publication of the six PSYC and ART conferences (2013-2019).

Catalogs (1993-2018): The woman and the stranger, Gilgamesh king of Uruk, Matter and breath, "The audacious enterprises I sing", The earth the water the man, The voices of rejection Giordano Bruno, "The universe all infinite ”, Internal Thought, Infinite Man Woman, Matter Energy Thought, Born from within, Infinite Matter, Terrafuoco, The revolt of thought, Image word.

"For philosophical training and personal research I turn to non-material realities, to the invisible that moves people, in particular to the expressions of" thought through images ". I love the history of thought and my presumption is to give matter, shape and color to creative thought, to that of shamans, witches, heroes, heretics, poets, geniuses ... over ten years to give images to Giordano Bruno's philosophy. Now I would like to paint the wisdom of images and the "movements" of the material origin of the human being. My reference is the "Theory of birth" by the psychiatrist Massimo Fagioli and with it research on the unconscious reality lived in the collective analysis seminars "(from the catalog" The revolt of thought ", Biblioteca Angelica, Rome 2016).

"I would like to tell you about a work (Materiamatrice, 2013) by Roberta Pugno that I liked very much, because, in a certain sense, I see it as a rescue of art. After Andy Warhold's rational reset, she evokes the famous can, but saves it from violence with a feminine and absolutely original creation, redeeming the imagination, warmth and color of the image. Certainly Roberta was not thinking of Warhold, a reference if we want to be insignificant, but the power of the image shows how creative research can start again, despite him ", Simona Maggiorelli, Historical-artistic considerations from cave art to postmodern, in PSICHE e ARTE I (Ass .ne Ipazia Edizioni).

"In the research on Massimo Fagioli's twenty-one words (see Left 2016-2017, L’Asino d’oro editions), Roberta Pugno finds a challenge, new stimuli. She focuses on the sound: “I am taking this great leap of moving from the stimuli of perceptive reality to sensations. It is not a memory, a gesture that makes me paint a painting, they are more biological things, more sound, more feel. The six volumes of PSICHE and ARTE just published propose precisely the challenge of relating to a new idea of ​​the human being and of art and, thanks also to these conferences, the turning point I am making is all-encompassing: moving from an art that " it makes the invisible visible ”to an art that makes visible“ what is not there, but will be there ”. Because just as Massimo Fagioli's "new words" give life to mental realities never seen and thought of, so artists have always tried to give images to non-material realities, often considered unknowable.", Amarilda Dhrami, There is a common thread in my painting, in left, 3/10 September 2021.

"Artist and philosopher, Roberta Pugno is called a painter of the invisible. Always fascinated by irrational thinking, she loves to investigate the human psyche and its manifestations. In all her works, matter, earth, air, fire, sound, time, sun, energy, mental and physical, triumph. Those that the artist materializes on the canvas are nuclei of thought; turning ideas and thoughts into images is very difficult. She manages to do this by creating works that are strongly present, dense and engaging. Color invades the canvas through layers and glazes painted by skilled and confident hands. The union, then, of color and light makes the shapes and symbols chosen to be the protagonists emerge from the background ", Cinzia Folcarelli, from the presentation of Roberta Pugno's solo show Those two red signs, Cartiera Latina, Rome 2021.

Canvases and tables - historical and recent -

and the new cycle on paper “Nella grotta”.

Reading of the works together with the artist.

“From seeing to hearing” a journey of images and words.

THE POETRY OF GIACOMO LEOPARDI

BETWEEN SOUND AND SENSE

and curator of PSICHE and ART IV,

They will be available in the studio

the box set of the six volumes of PSICHE and ARTE

A new collective research on art and the human from its origins to today.

Via Girolamo Benzoni, 26 - Rome (between Piramide and Garbatella)

Live streaming on the IPAZIA Facebook page is foreseen.

The green pass is required. 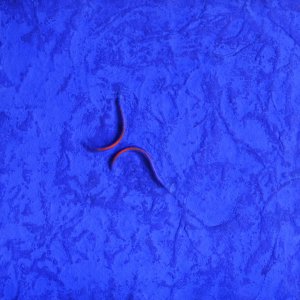 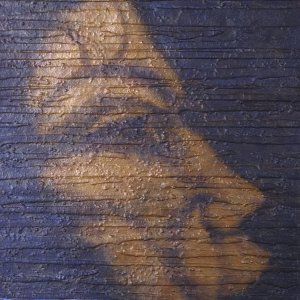 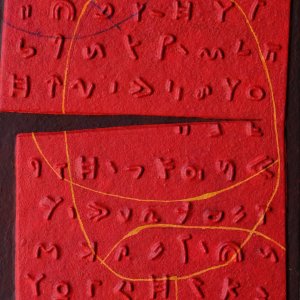 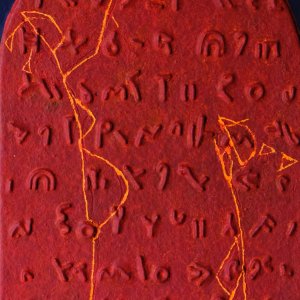 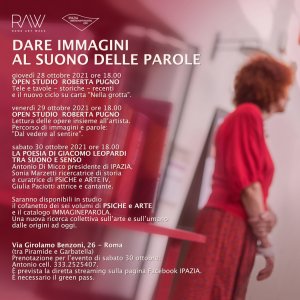 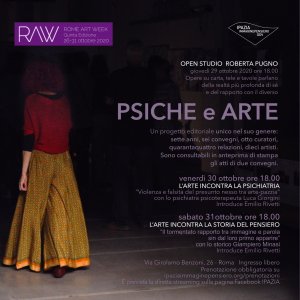 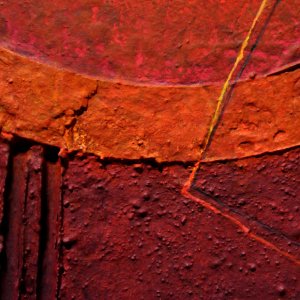 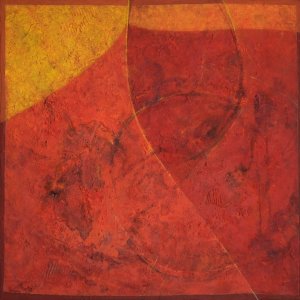 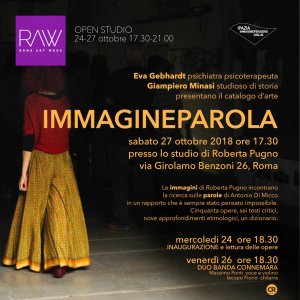 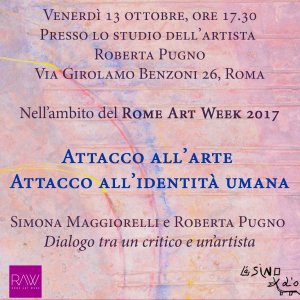