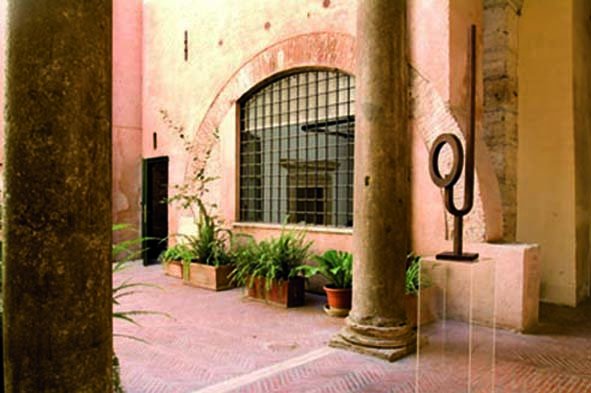 The origins of Galleria Edieuropa - already Editalia - must be traced in the publishing of the first number of the magazine "QUI arte contemporanea" in july 1966.

The pioneers where five artists: Capogrossi, Colla, Fontana, Leoncillo, Sadun and, in the redational committee, appeared names as Pasmore and Lipton, rather than historians of arts as Giovanni Carandente, Lorenza Trucchi, Mario Verdone and Marisa Volpi.

Editor and director Lidio Bozzini, founder of the publishing house Editalia, in the editorial department of the magazine in via del Corso started organizing art shows of the most famost artists and younger ones. Among the exhibits to remember, there's the one on Accardi, on Turcato, on Paolini, on Kounellis, on Scialoja, on Pascali, on Mattiacci, on Mochetti, on Uncini, on Afro and on Burri. At the shows followed debates with the partecipation of italian and foreigners art critics, that raised a big interest in all of those that were passionate in the evolution of art during the "mythic Sixties".

The Gallery has always favored esteemed names of the area of interest of the none figurative italian language as Balla, Dottori and Prampolini; memorable the anthological on Futurism in Rome from 1910 to 1940 and the show The myth of the machine in Futurism.

Among the most important shows orgainzed from the Gallery outside her own headquarter: Burri, may 1975 at the Sacred Monastery of Saint Francis at Assisi; the retrospective on Sadun in december 1976 in Rome and in march 1977 at Siena; the show on Art of the Twentieth century in the december of 1990 at the Palace of the Industry in Rome; Primato 1940-1943, at the National Accademy of San Luca in december 1996; Franco Giuli, at the Mole Vanvitelliana of Ancona in may 2000 and the shows at the Museum of via del Corso in Rome: From Futurism to Abstactism, april 2002; Art Concrete Movement 1948-1952 in may 2003; Umberto Mastroianni - european sculptor in november 2005, exposed in Spoleto, in occasion of the Two Worlds Festival, in july 2006.

After the historical location in via del Corso 525, in 1998 the Gallery transferred in the Girasole's building in Viale Bruno Buozzi, designed from the architect Luigi Moretti and in december of 2007, with a show dedicated to Afro, the Gallery inaugurates her new location in Palazzetto Cenci.

In october 2008, organizes at the National Calcografia of Rome, the show of Armin Linke, Nuclear Imaginary; and in the gallery, apart from the others, the show on Gruppo Cobra, march 2009, Futirism settings, november 2009, Pages, Roberto Almagno, march 2010, Art of the cinetic movement, and programmatic art, november 2010, and in december 2011 a show on Giacinto Cerone.

In may 2012, the Edieuropa, for the "Urban Art" exposition, with the artist Bros, realizes the installation for the Fountain of the Terrace of the Macro Museum of Rome and in october, the intervention "site specific" of the artist Ozmo, on the wall in front of the Museum.

In october 2012, the National Gallery of Modern Arts, in collaboration with Editalia - today owned by the Polygraphic of Rome - and Edieuropa, dedicated a show to remember the contribution offered to the knowledge of contemporary art by the magazine QUI arte contemporanea, that Editalia has published from 1966 to 1977, in occasion of the 60th anniversary of the publishing house, founded by Lidio Bozzini in 1952. In december 2013, with the show Seventies, the gallery honored the artists that partecipated at her birth and formation. Continuing to follow this work of recovery of memory, in april 2014 inaugurates the show Immages of color: Accardi, Hafif, Turcato, that has been the first show of the gallery in 1967. In december 2014, with the show Contemporary memories, with a tribute to Piero Sadun, dedicates a special memory to the artist, that has been one of the founders of the magazine QUI arte contemporanea. In december 2015 the show Turcato around Turcato, a recognition at work of one of the most important artists of the 900 and of the artists of “Forma 1”. In june 2016 the show Afro beyond painting, an excursion of the most unknown works of the greatest Master; in october the opening of the exhibition Colors. ; in april 2017 the double personal exhibition Guido Strazza, Gianluca Murasecchi – from sign to sign, after the show A little Pop - Angeli, Festa, Schifano and, in december Piero Sadun’ book, by Alessandro Masi, with an exhibition. In april 2018 the show of Giuseppe Capitano Earth’s Heart, ideated by Lea Mattarella and in june the shows: Papers, from Futurism to today in the gallery, and, in Sicily, in the Gagliardi Museum of Noto, Abstracta - from Balla to the Street Art . In october the show Pino Pascali, ingenious fluidity, a tribute to the most importan artist of the “Arte povera”

2019 opens with the exhibition, inaugurated on February 13th, Abstracta - from Balla to Street Art - focus on Street Art. In June the Gallery organizes, in collaboration with the Sadun heirs, the important SADUN100 project, the first stage of L'Aquila, Palazzo dell'Emiciclo and following Siena, in July, at the Magazzini del Sale Palazzo Pubblico. 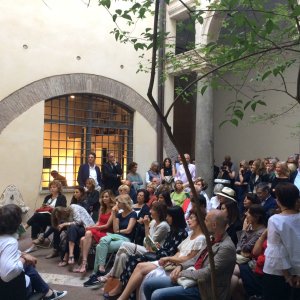 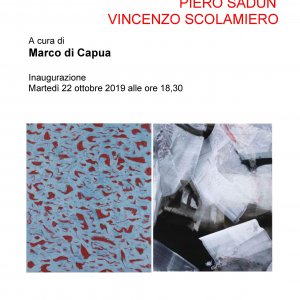 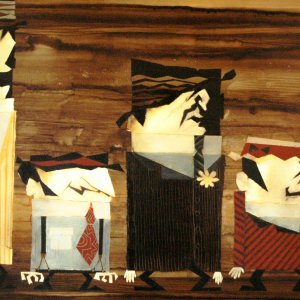 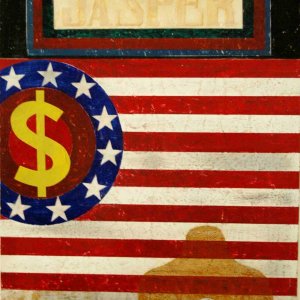