MANERA AGAINST ALL! - BEYOND THE SCHOOL OF PIAZZA DEL POPOLO

Icons and myths of sixty years of history, told by 18 artists of our time 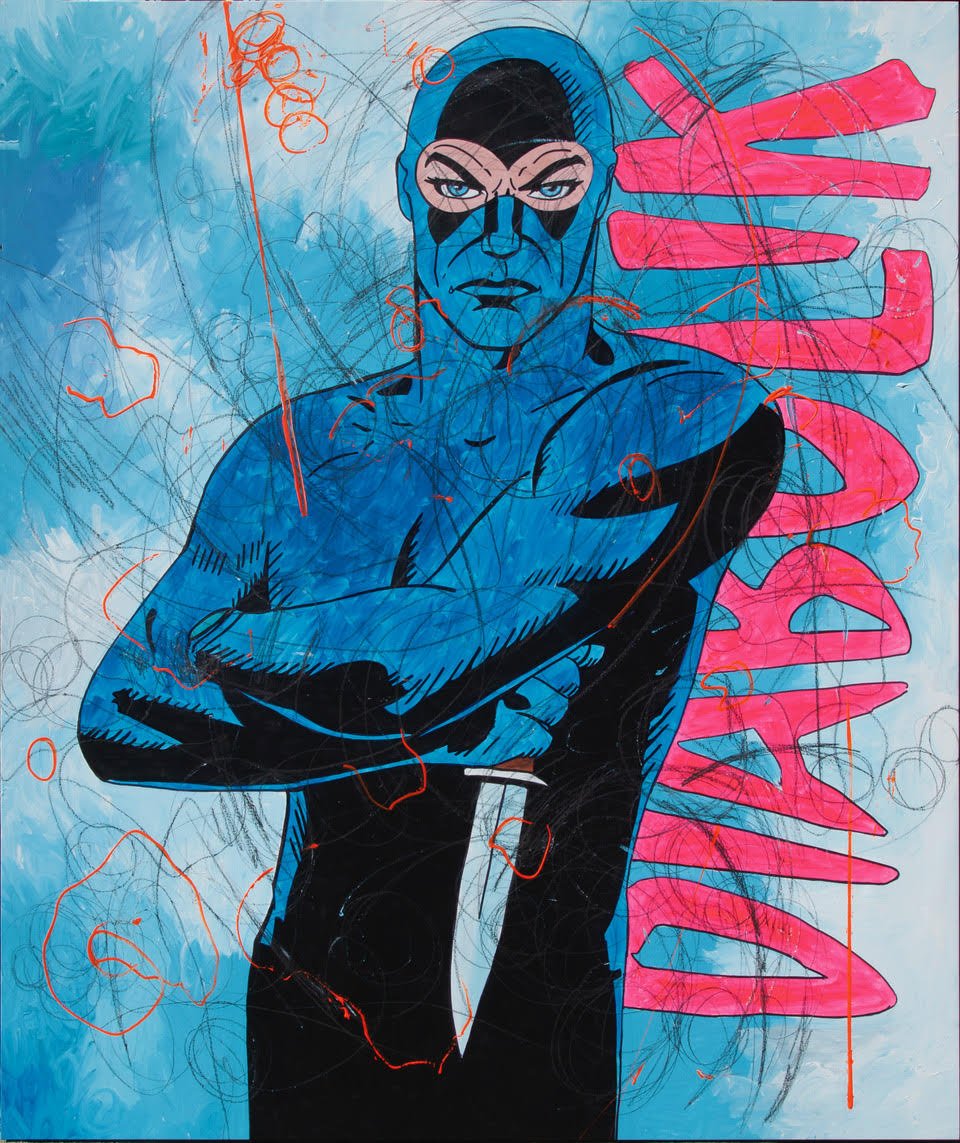 It will open in Rome on October 27th at the Restelliartco Gallery. “Manera against all! - Beyond the School of Piazza del Popolo ", the exhibition conceived by the gallery owners Raffaella Rossi and Filippo Restelli on the occasion of the Rome Art Week 2022, the most important Roman artistic review dedicated to contemporary art and new performative languages, which will be held from 24 to 29 October 2022.

An exhibition that has its roots in the School of Piazza del Popolo "and in those magical years in which the artistic dynamics were experimented which then resulted in the creative experiments that will populate exhibitions, museums, Quadrennial and Biennial of Art" as Francesca Barbi wrote Marinetti grandson of that immense Filippo Tommaso who was one of the greatest artistic innovators of the 20th century.
“These are the years that follow the beat generation, when music represents a magnetic pole of aggregation. Art is connected to musical events with light shows developing a counterculture necessary for information and artistic inspiration "(F. Barbi Marinetti).
Here a very young Enrico Manera was born and trained, who has always been the foundation of his art of creative experimentation.

It was 1976 when at the age of eighteen he sculpted "J.C.M." (Jiulius Caesar Manera) a fiberglass statuette in which, with the light-hearted and mocking style that belongs to him, the artist sees himself in the guise of a Roman emperor.
In 2021 he created the beautiful plexiglass sculpture "Boccioni Extraterrestre", photographed several times with the actor Franco Nero at the International Festival of Dance and Dances, a tribute to the futurist Umberto Boccioni and the dynamism of forms.
It arises from the influence of the creative ferment experienced within the "School of Piazza del Popolo", which the artist will later describe in his book "Café des Artistes", "Power" mixed media on cardboard from 1978.

Manera is the protagonist, narrator and interpreter of over fifty years of historical, artistic and customs changes. In his works, exhibited until November 30, the heroes of comics find space, such as the "Diabolik" canvas of over two meters of which, on November 1 of this year, marks the sixtieth anniversary of the release of the first cartoon number; "Batman" in mixed media on cardboard from 1997, the "Theaters of Batman and Superman", three-dimensional plexiglass cases; Superman is also depicted in his secret identity, in 2012's mixed media “Clark Kent” on canvas.
The multifaceted Manera began working in the cinema as an actor in the mid-1970s and from his passion for the seventh art the works on cardboard "Paramount", "Warner Bros" and "M.G.M." of 1997.
While it is from 2002 "Warner Bros" made on canvas with the logo in fuchsia.

The gaze then shifts to “Ex Da Volpedo” from 2002, in which the historic work by Pellizza da Volpedo “Il Quarto Stato” is represented by Manera with neon lights in a plexiglass case.
Again the use of neon is found in "Ex Vincent" from 2002, a tribute to Van Gogh. On the walls of the Restelliartco Gallery, "Manera contro Tutti" continues with "Imperial Nightmare" from 1998, "Kiss", a canvas from 2012 with the iconic Bacio Perugina represented in a pop key; a pop that is also found in "Coca Cola" in mixed media on paper from 1998.
Also on display is the portrait of Manera by Mario Schifano, one of the very few portraits made by the Master of the School of Piazza del Popolo.

The title of the exhibition "Manera contro Tutti" was wanted by the Roman gallery owners Raffaella Rossi and Filippo Restelli, to underline how, within an exhibition itinerary, each artist, through an ironic challenge conducted with pop shots, can tell his or her own vision and perception of the icons and myths that are part of everyone's language and daily life.
The Roman artist Fabio Ferrone Viola with his "Coca - Homage to Mario Schifano", made with acrylic paint and bottle caps on canvas and the collage with newspaper "Kennedy is alive", proposes in a pop key, thanks to use of recyclable materials, two myths of our time; while in "Cocaine USA Flag" made with cans of Coca Cola pressed and inserted into the fabric, the white stripes are the link between the writing of the drink, the drug and its disproportionate consumption, especially in the States. In his "Pop Queen", Fabio Ferrone Viola pays homage to the great Queen Elizabeth II, icon and myth of an era, who recently passed away.
Monica Casali, made of acrylic, resin, silver leaf and original period pieces, her "Jaguar" E Type, the iconic car driven by Diabolik and defined by Enzo Ferrari as the most beautiful car in the world.

The artist Stasi, with the acrylic on canvas "The Industry of the Pig", retraces the industrialization project of the late 1700s. The pig wears nineteenth-century clothing of clear English workmanship. In the lower part a skyline emerges, a symbol of urbanization at the expense of modern society.
And then again the Roman artist Cristiana Pedersoli, daughter of the unforgettable Bud Spencer, who proposes the face of the actor who is the symbol of Italian cinema, in a stylized image on sculptures in black, silver and rough metal.
It continues with "The Big One" by Marco Bettini a gigantic American dollar on metal re-proposed in a pop key and with particular irony, and "Piazza del Popolo" by the refined artist Irem Incedayi which visually brings us back to the center of the discussion.

Other artists exhibited in the rooms on the upper floor of the Gallery include "Kellogg's Catwoman" by the artist Pennyboy trained in the underground circles of the capital, who portrays a fascinating Catwoman on molded aluminum.

Among the comics also the "Paperinik" by Biagio Castilletti, made with countless pieces of cans worked and meticulously colored and the superhero "La Cosa" by Gigi Folliero made with the "Tape Art" technique, strips of colored and then melted adhesive tape, to mimic the brushstroke of paint on canvas.

We continue with Roberta Bissoli's "Americas", made with US dollars instead of colors, with the artist Skiri who brings characters from comics and cinema to his works, distorting their roles, and transforming, with ironic paradox, the good and the bad, and the international streetartist David Pompili.

Among the iconic objects on display, the "Big Apple" of 2021 by Milena Bini, the sculpture "SPQR" by Marcello Maugeri, (electrostatic painting on aluminum) an elementary work with which the artist celebrates Enrico Manera, master of experimentation and lover of creative reuse. The formal and flat Gray typical of engines becomes Color, the vital energy of Rome, the eternal city, an artistic workshop in continuous ferment.

The Roman artist "Shout" presents the iconic Tomato Ketchup, Mayonnaise and Sweet Relish sauces on three distinct canvases, in an international neo-pop style and in which the colors of the three sauces recall the Italian flag.
Nayara Sikaada, pseudonym to conceal the identity of an artist shrouded in mystery, presents two works of great impact "Mouth" oil on canvas depicting the mouth of Mick Jagger and "Hands 2", oil on panel in which the artist paints the hands of Keith Richards playing the guitar.
The "Cash & Carry - Icons" project was presented for the first time exclusively for the Restelliartco Gallery, in which the 29-year-old Factory artist uses the receipts as a contemporary canvas on which to create his works. An object thus identifying globalization and everyone's daily life, becomes a pop symbol, a "popular" experience, a work of art within everyone's reach.
The solo show dedicated to Enrico Manera is organized in collaboration with D.C. Art by Daniele Cipriani. 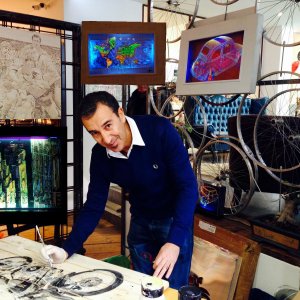 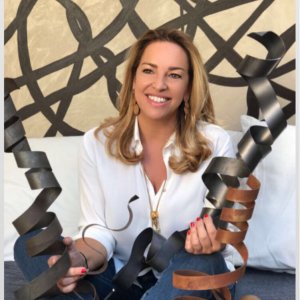 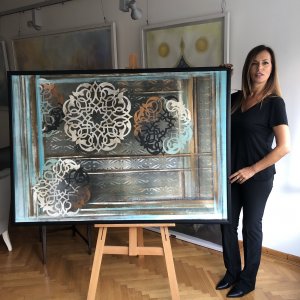