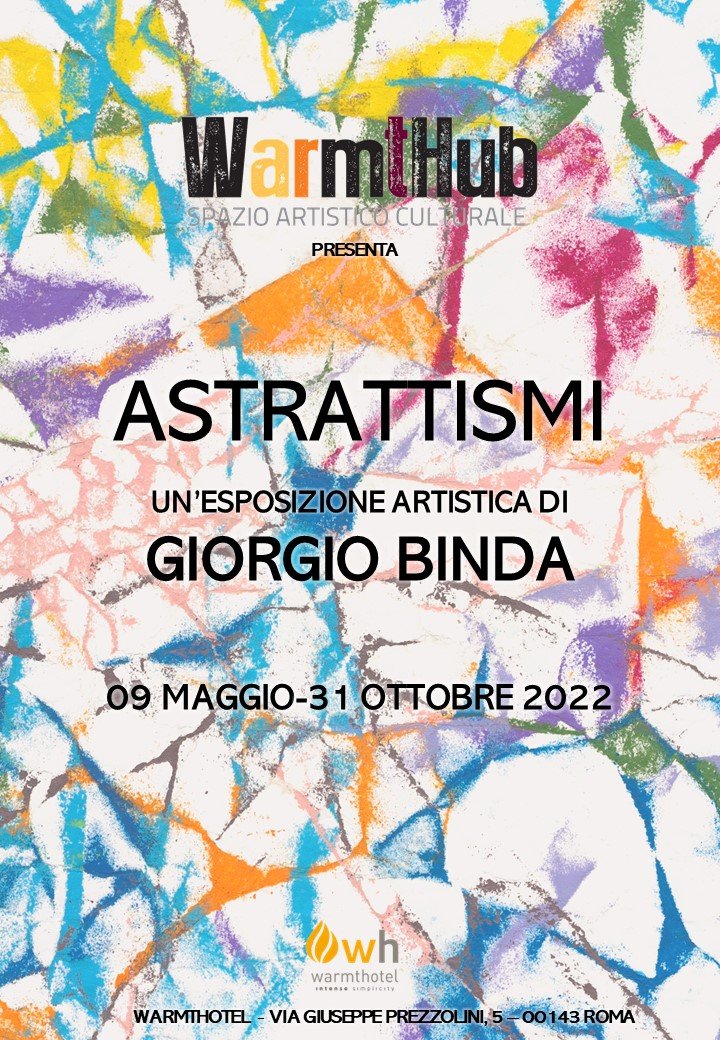 The "Abstractionisms" exhibit revolves around four display sections, representing the individual creative phases of the artist, all attributable to abstractionism.
In this circuit, the first section, called "Colors," presents works of art characterized by sets of lines and free forms characterized by both full and intense coloration as well as more muted pieces to make up the entire chromatic wheel. The compositions, often displayed as pairs, at times reveal some key elements of the artist, such as forms on their own or the persistent ramification of lines. The rarefaction of the contents results in some works of art being highlighted to represent the search for essentiality.
The second part, called “Monochrome”, brings together monochromatic paintings in gray tones where the compositional and stylistic formula remains unaltered while depending less on colors.
For the third section, “Geometric,” color returns while the free forms and the linearity that had previously been represented simplify themselves to become pure geometry. They are still connected to the previous works of art, as in the pictorial technique and especially in the particular way of applying color, but in this phase, the elements are now more of a study function on combinations.
In the fourth and final section, dubbed “Fluids”, even the forms become less. The main character is just color in varying tones and nuances, distributed casually via layers to form magmatic ensembles and enveloping atmospheres capable of creating personal suggestions and hypnotic attractions.
The exhibition in its entirety offers us works made with an unusual technique and an original alphabet of signs. The search for abstraction is constantly present in order to avoid even involuntary juxtapositions with real references. The emphasis is placed on emotional states and atmospheres that are diversified through the individual exhibit spaces: they range from positive and optimistic sensations, due to the dynamism of the formal contents and the accentuation of the chromatic aspects of the first exhibit space; then move on to the monochromatic painting where shades of gray evoke more relaxing emotional situations, in reference to the minimalist atmospheres of contemporary settings. In the third exhibit space, the confinement of color to the bare essentiality of the geometries generates contrasting emotional situations, the expressive freedom which is still partially present, now emerges entrusted to the exuberant range of colors. And in the last space, emotions become concentrated. Closer observation allows you to focus on sets of shapes and details created autonomously as a result of the random distribution of color. The investigation of these
contents involves an intimate and participatory relationship between the observer and the work of art that encourages the emergence of subjective feelings and emotions that live in our deepest interior dimensions.
Also on display are some table lamps that have been created using the artist’s abstract images. Here, the artist uses the lampshade itself as a canvas for a pictorial work, joining the artistic and functional aspects, where all aspects benefit from each other: the light of the lamp enhances the artistic work while the art enriches the esthetic value of the object itself. 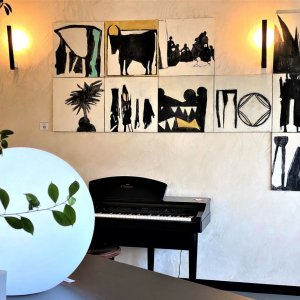