DIFFERENT PERSPECTIVES, the conceptual foundation on which the exhibition by Regula Margrit Bill, Waltraud Gemein and Pia Kintrup is articulated, a title specially chosen to indicate the subjectivity in the interpretative language of the three artists. A subjectivity in which three women interpret themselves with works that dialogue through emotions, skills, contextualities which, although dissimilar, reveal a connection between the different perspectives.
The exhibition attempts to bring to life a conception of individual personal experiences connected to the subjective reality and correlated to the experiences of the three artists by soliciting individual perceptions in the viewer.

Regula Margrit Bill studied at the Academy of Fine Arts in Bern and followed courses with illustrious professors, managing to complete her training from the three-dimensionality of ceramics to the realism of painting.
She usually works in small series, but always without a design plan. She starts with a small selection of colors, adds black and white, draws a line, applies a color, mixes colored intermediate tones, sweeps again, paints, tries something new and so on.
Her creative strength finds expression in the fusion of various materials with doing and observing what emerges.
In this way Regula Margrit Bill is in an inner dialogue with the colors, the technique, the pictorial background, the hands, the eyes, the feelings and what develops from them.
The resulting three-dimensional depth in the painting often reflects the emotional depth she sinks into when she works. And often in the paintings there are, in addition to the abstract elements, associative parts of the image, which invite you to enter or dream.

Waltraud Gemein was born in 1951, lives and works in Germany.
During her studies in Göttingen she was a private student of the painter and sculptor Henry Hinsch (1909-1979). Her works have been exhibited in important exhibitions in Europe.
Waltraud Gemein's figures represent the unity of all living beings, be they humans, animals or plants. There are only gradual, non-essential differences between these three forms of being. This is what the artist wants to express in her works. Waltraud Gemein elaborates the worlds that emerge from individual figures with a wide variety of pens and pencils, she loves their precision, but also the variety that can be expressed through them. Her figures of her are created in a multi-stage process, often accompanied by classical music, the artist lets the pencil slide over the paper, creating one drawing after another. After a time when the figures have become strangers to her, he looks at them again and finds that they express something special.

Pia Kintrup defines herself more as a visual artist than a photographer.
During her university studies she realized that expressing herself only with photography was not enough for her and she therefore tried to expand her knowledge and technical skills.
The creation of new works for the artist is a complex process in which pieces or themes overlap. She usually works in the background in an abstract way, while other connections and references are created in parallel in the foreground. You describe your conceptual, aesthetic, and visual way of working, using collective memory and subjective imagination. Pia Kintrup does a lot of research in advance, always experimenting with new approaches, using random elements, which are essential components of the process, which she will reflect on later. It is important for her to ignite the viewer's imagination as well as her personal experience of her. If my work makes the viewer think about the world, I have already achieved a lot. 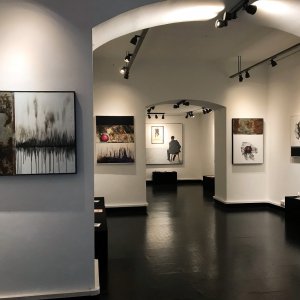