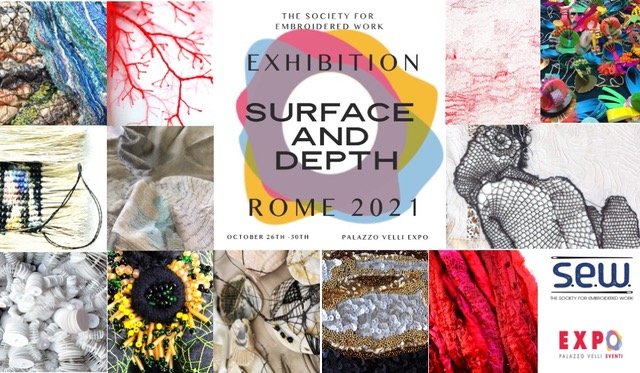 The Society for Embroidered Work’s second international contemporary stitched art exhibition ‘Surface and Depth’ will be held in Rome during Rome Art Week 2021 from the 26th to the 31st of October.

Members of the Society will be sending their work from across the world to be displayed at the 14 th  century Palazzo Velli Expo in the heart of vibrant Trastevere, one of Rome’s oldest areas that has become ultimately also the heart of the city’s art scene, mixing up a medieval romantic surface with a cool contemporary energy
beneath it.
“Depth is not pure emptiness, one can attribute a certain consistency to it… The painter will be able to express it by giving it a body, not by suggesting it, but by painting it as if it were a material thing”, wrote Jacques Riviere in his essay “Present Tendencies in Painting”. With sculpting textiles, three dimensional experimental stitches and all kinds of found objects that the S.E.W. artists use in their work, the depth of the space of an artwork does assume a new material meaning.
In a few years we have seen a rapid growth of international art market for textile, fiber and stitched art, with older textile artists like Sheila Hicks or Olga De Amaral becoming truly international stars, with a whole new generation of artists that use fibers and stitches as their means of artistic expression, and with a new
generation of collectors that don’t accept anymore a rigid division between “fine art”, “contemporary craft” and “objects”. The boundaries that once separated painting, sculpture, textiles and weaving are long gone. A
touch of the artist’s hand that makes a stitch is now as highly appreciated and “tasted” by art critics and collectors as a touch of a painter’s brush once was. It stands for that expert experience, that skilled person that is behind the object.

Surface and Depth showcases the new art wave of artists who use thread as if it were paint, or to create sculptural forms. These artists are pushing the boundaries of how embroidery is viewed across the globe.
The old idea of embroidery just being a decorative craft is being killed off by these extraordinary artists that dedicate their research to important social, scientific and environmental issues, embodying the embroidery with much, much deeper meaning than just “surface”.

The Society for Embroidered Work was set up in 2018 and has more than 600 selected members from 43
countries. These artists are producing strong, provocative work, challenging how embroidery is seen by the
art world. The Society was set up to make stitched art seen as Art, and to promote the idea that using a
needle and thread is the same as using any other art medium, as legitimate as picking up a pencil or brush.

Surface and Depth will show the range and skill that the Society’s artists have. This is an exhibition of the
best and most exciting art exploring the theme in a variety of ways. Almost 70 artists from 13

different countries, and many sculptural works along with more traditional framed pictures, there will be
something for everybody - as long as they like the different, daring and unexpected in art. 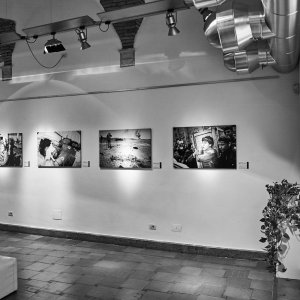