Theater is a metaphor for life. Than camera enters the scene 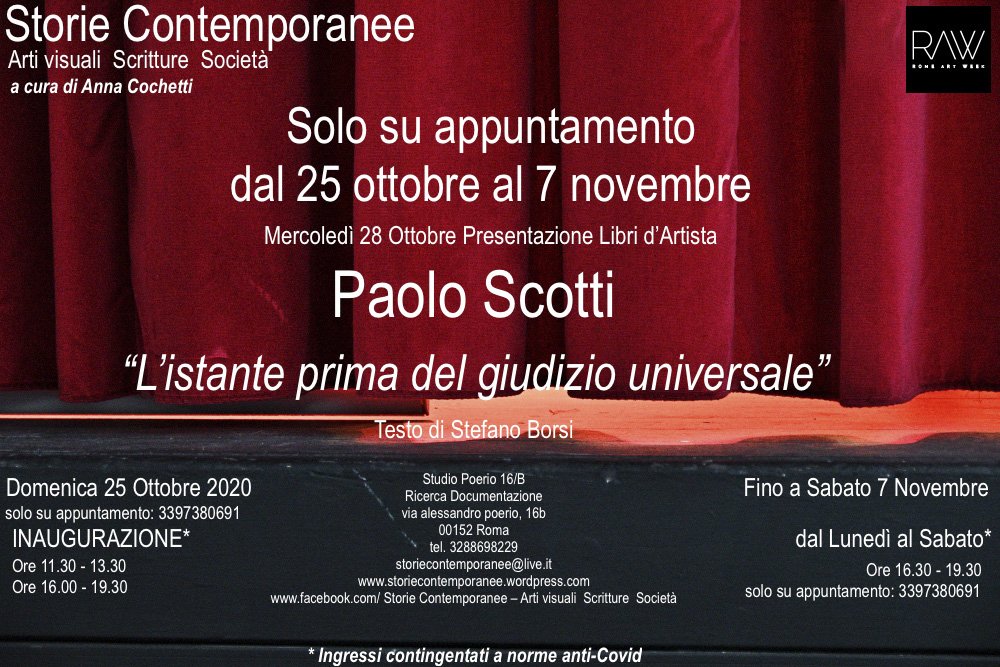 “The Instant Before the Final Judgment”

Sunday 25th October 2020, from 11.30 am, in the occasion of the fifth edition of RAW Rome Art Week, 26th-31st October 2020, the Project STORIECONTEMPORANEE, curated by Anna Cochetti, in the gallery ‘Studio Ricerca e Documentazione’ in Via Poerio 16/B, will host the project by Paolo Scotti, “The Instant Before the Final Judgement”, a

complex research project in which, as Stefano Borsi highlights in his foreword, “the highly experimental expressive intersections” that make interact writing, painting and photography, realise through the choice and the re-elaborated version of a subject – “the stage photo” – an unsettled, subtle and finally dramatic reflection about the meaning of Theatre, as a metaphor of life, or rather as Life itself, tout court, because “the real theatre is in the soul’s creases”.

The opera was born at the point when, as Paolo Scotti states in a note, “also a photo camera enters the scene and everything becomes a game of mirrors”.
At the moment when everything takes on the shape and the significance of a figure, physical and metaphysical, between vision and writing, of a Labyrinth made of mirror walls, in which – like in “Minotaurus. Eine Ballade” by Dürrenmatt – everyone is mirror of one’s own Minotaur.

The canvas “Labyrinth” that opens the itinerary – graphic texture of labyrinth-like signs in which text and writing are welded together and entangled in an inextricable continuum – represents simultaneously the place, the map and Arianna’s thread, which accompanies (but does not save) the Man in search of self, in the violent transformation of his every- day, when the inside mirror reflects, unforeseen, one’s own Minotaur. The images-theatre unravel along this itinerary of a “labyrinthine thought”, photographic images “treated, elaborated by a pronounced painting vocation” (Stefano Borsi), dialectically correlated with the original photoshoot.

Wednesday 28th October 2020, in the context of the Events organised for the occurrence of RAW Rome Art Week, the 6 Artist Books will be presented, produced in original copy and signed, and will include new photographic images realised through the re-elaboration of the original negatives. The Artist Book will be equipped with critical texts by Stefano Borsi and Anna Cochetti, and by the artist own written work “The Instant Before the Final Judgment” and “It is Necessary to Lose Your Way”.

Paolo Scotti was born in Rome in 1952. He is first student of Giorgio Caproni, then of Sigfrido Maovaz, Franco Pierluisi, Gabriella Colucci and Alessandro Tagliolini. After the military service he works for some years within the graphic and advertising industry, cinema (a job that he does not gladly recall) and photography – which, as a matter of fact, he will never completely abandon – to go back to sculpture as Alessandro Tagliolini’s assistant.

Later he will go back to painting and engraving, also because of sculpture’s high cost. Meanwhile, he develops an interest – perhaps obsessive – for Literature, History of Art, History, Philosophy and, not least, Music.
He exhibited his art in various Italian cities and participated in art events: in other words, all the prescribed rituals.

He believes to have inextinguishable debts towards, in addition to the abovementioned teachers, also Homer, Hesiod, Phidias, Socrates, Bernini, Dante, Piero della Francesca and Bach, Michelangelo and Beethoven, M. Proust, H. Cartier-Bresson and many others that would be too long to list here.
Currently, he dedicates himself to wine, theatre photography and considerations about his own and other people’s stupidity. 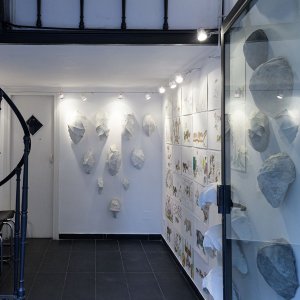