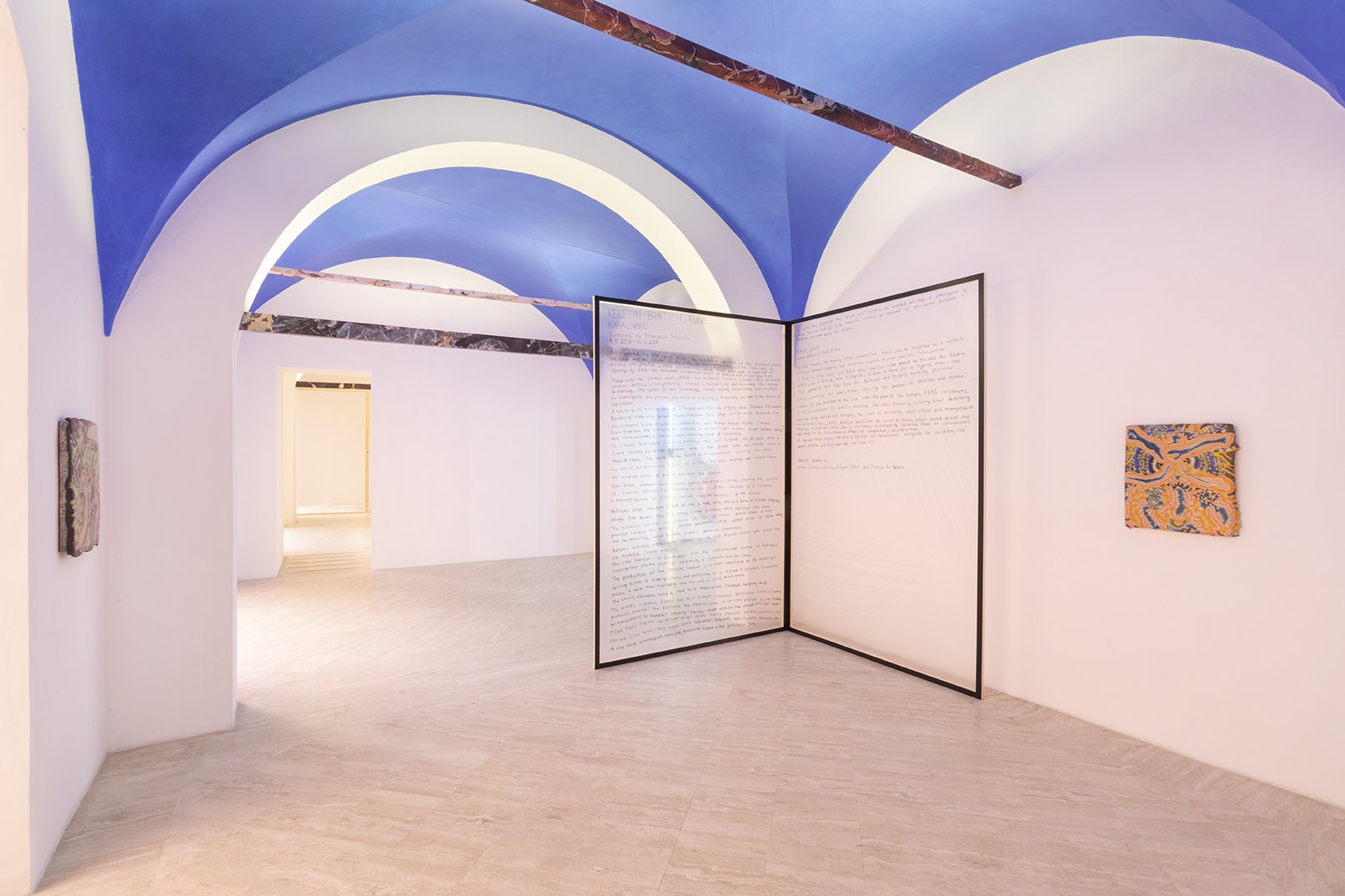 As suggested by the split title, the exhibition consists of two distinct parts: the Casa and the Stalla. In the Casa, the main gallery space, _Ruine showcases the artist’s solo practice. _KOVO occupies the smaller Stalla space and is comprised of offerings by KAYA – the sustained collaborative project of Brätsch and artist Debo Eilers.

Titled with the German word Ruine – ruin in English, rovina in Italian – this exhibition continues Brätsch’s longstanding interest in destabilizing and expanding the language of painting. One tactic of this methodology involves ongoing collaborations with artisans to interrogate and provoke the notions of subjectivity historically ascribed to the figure of the Painter.

A new group of marbling paintings [Psychopompo] from the ongoing series Unstable Talismanic Rendering, made with German master marbler Dirk Lange, will be shown alongside new stuccomarmo works, created in collaboration with the Roman artisan Walter Cipriani.

Seen together, the installation suggests an ancient site – a ruin – caught between decay and reconstruction, a liminal and visionary place of transitions.

To create Brätsch’s marbling paintings, inks and solvents are dripped onto a liquid surface to create a pattern, which is then pulled from the surface with a sheet of paper. The work is the result of a collaboration involving four hands – the two of the artist and two of the artisan – but also employs and necessitates the universal forces of gravity, repulsion, and adhesion.

Non-human elements work with and against the artist’s choices, obscuring the instincts of subjective decisions. Each marbling on view in _Ruine functions as a talisman, a macro-projection of micro-initiatives onto the mechanics of the unknown.

Brätsch’s other new body of work on view is made using stucco, a form of plaster originally brought from Bavaria since XVII century, in order to imitate marble and other rare stones.

The material unifies and extends the logic of matter established in two previous series: the artist’s antique glassworks, which contain slices of agate stones, and the marblings, which imitate miasmic geological phenomena.

Brätsch’s imitation stone–slabs appear as the very physical objects upon which they are modelled (stone mimicry). This time inversion – or future past – suits the interconnected cosmos of Brätsch’s investigations into how painting’s subjectivity is composite and non-linear.

The production of the stuccos, however, is in stark opposition to the marblings’ defining actions of dropping, chance and watery flow; it is instead a resistant, sculptural process, in which hand-modeling does the work of fluid brush marks. The stucco, therefore, could be read as a materialized, flattened marbling drop.

The artist’s signature figures here as subtext: nicknamed Brätschwurst (after a German Bratwurst sausage) the distortion and materialization of her name provides a clue towards her manipulations of material - creating “sausage” shapes, which are then pressed into flat layers. Titled Fossil Psychic, the stuccos’ bright colors induce prescient monsters, fragments from past and future series; they break apart into bones, body parts, and ritualistic amulets - even as they resist erosion and exist stone-like, as paintings trapped within petrological time. As works, they comprise the “wurst–case” scenario, the wounded but magical emergence of energy from the least of living materials, speaking an alphabet of pre–verbal gestures, a language encrusted below the surface.

As part of the residency offered by the foundation, KAYA has spent a month working on site at the Fondazione Memmo to create a place-specific intervention: _KOVO. For this iteration, the ongoing KAYA collaboration - which can be imagined as a violent collision between painting and sculpture - presents a series of KAYA lamps and KAYA skins.

KOVO - covo in Italian, cave in English - is also a term for a hybrid man-cow. This hybridity sets the tone for Brätsch and Eilers’s working process: KAYA's paintings are semi-human, conjuring the specters of animism and science fiction. In the darkness of the cave, under the glow of the lamps, KAYA celebrates a rite of evocation. Yet KAYA's paintings flee their humanity, refusing their determining destiny: they overflow into savagery, the realm of animality, where ritual and transgression are at home.

For _KOVO, Brätsch and Eilers have been joined by Naples-based sound artist and musician Nicolas An Xedro, who is currently investigating preverbal states of consciousness and matter in its simultaneous stages of composition / decomposition.

A limited edition record The Year Of The Dog has been produced alongside the exhibition; the album’s release will inaugurate the new label VS.

This project takes advantage of the Fondazione Memmo’s unique position and mission, which allowed the artists to create works in situ and employ materials and techniques previously unfamiliar to them, communing with the city of Rome’s historical and artisanal fabrics.