Between Art & Cinema: Sons of MAAM: the ideal commitment in the work of Paolo Consorti. 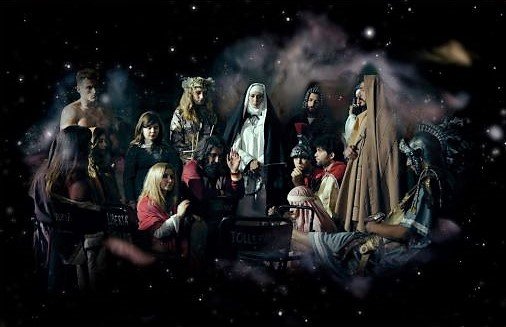 The project entitled: ‘Between Art & Cinema: Sons of MAAM. The ideal commitment in the work of Paolo Consorti’ includes a film and an exhibition which show the different features of the work of this multimedia artist who is the author of artworks, films, videos and performances. The aim is to hghlight the ideal (civil and moral) commitment that Consorti infuses  into his work by using an ironic and cross language and contaminating the pictorial practice with the filmic and electronic image.

Both the exhibit and the film are part of the Rebellio Patroni, a cycle based on a contemporary and symbolic reinterpretation of the actions of the Saints of Italy, expression of the popular culture of our country and of a geographical and spiritual unity.

The Rebellio Patroni Project started in 2011 on the occasion of the 150th anniversary of the Unification of Italy and was conceived as a many-sided and in progress path in which paintings, sculptures, performances and films constitute the whole corpus of the project. In this project the saints by Consorti express themselves through paradoxical actions and put an original and peaceful form of antagonistic action into effect in the present. This action proposes the urgency of a commitment in the present time, bypassing ironically the rhetoric on the moral and civil decay of society. The Sacred and the profane mingle without scandal or sacrilege, there is nothing blasphemous, since the concept of holiness becomes the excuse for dealing with worldly issues and proposing a form of spirituality for the present time.

In this cycle Paolo Consorti has reworked the sacred iconography imagining the Saints move in the streets of our cities (Venice, Milan, Naples) and has created ironic images with a strong impact by mixing the retro kitsch of the holy cards with the wisdom in the paintings of the altarpieces. What makes his work, both pictorial and cinematographic, original and more effective for the people is the fact that he makes the Saints Patrons impersonated by famous people such as actors, singers and visual artists. For example, San Francesco is interpreted by Elio delle Storie tese, San Gennaro by Giobbe Covatta and so on. For this reason, the project   also wishes to be a tribute to cinema since it will occur precisely at the same time when the Rome Film Festival takes place (October 18 - 28, 2018).

There are 13 works in the exhibition, to be precise:

There is a small catalog of the exhibit.

Born in 1964, Paolo Consorti is an italian artist, performer and director.

He attended the Academy of Fine Arts in Macerata, and while there, he collaborated with great Russian cinema director Sergei Bondarchuk. In 1991, he debuted his first solo exibhition at the Palazzo Ducale in Urbino. In 1992, the philosopher Hans-Georg Gadamer made a comparison between Consorti and Hieronymus Bosch on the base of their shared “contrast between pictorial and dramatic balance of modern and post- modern”. In 1994, the art critic Pierre Restany called Consorti’s work the “urgency of a sublime post-modern style”. In 1996, he participated in the XII Quadrennial National Art exhibit at the Palazzo delle Esposizioni in Rome. In 2003, he took part in the First Prague Biennial at the Veletrzni Palac in Prague, and the next year he participated in the XIV Quadrennial National Art exhibit at the Palazzo della Promotrice in Turin and was included in the Zanichelli Art encyclopedia.

In 2006, Consorti took part in "Garten Eden – Der Garten in der Kunst seit 1900" in Emden, Germany, and was one of the Italian artists chosen to represent Italy in the nature and metamorphosis expositions at the Urban Planning Exhibition Center in Shanghai and the Millennium Art Museum in Beijing. In 2008, he showed his work at the World Olympic Fine Arts Museum in Beijing and was invited to the Moscow Biennial for Young Art at the Ruarts Foundation of Moscow. Also in 2008, he was picked for the Farnesiana Young Collection at the Italian Ministry of Foreign Affairs, exhibiting the works of young Italian artists most representative of the national scene, and he was included in the young Italian art Top 100 published by Flash Art. In 2009, Consorti created a large fresco of the nativity, electronically projected on a public square in Assisi. In 2010, he created some music videos for the Italian edition of the TV show XFactor. In 2011, he took part in the 54th Venice Biennal at the Italian Pavilion, where he presented the first performance in his Rebellio Patroni series. This was a work in progress that was composed of different performances in which the patron saints of Italian cities acted with paradoxical actions in the present time. The act included the participation of Elio, from the band Elio e le storie tese, who played the part of Francis of Assisi. He followed this by a performance at the Madre Museum in Naples, with actor Giobbe Covatta playing San Gennaro. He has also done solo expositions in Melbourne, Berlin, Amsterdam, Minneapolis, Hamburg, New York, Marshall and Tokyo. In June 2012 he will bring "Rebellio patroni" with a great solo show with paintings, installations, video and performance at Palazzo Reale of Milan. 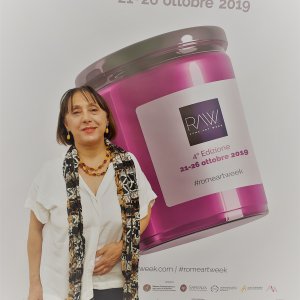