Verdiana Patacchini - The bright side of the womb 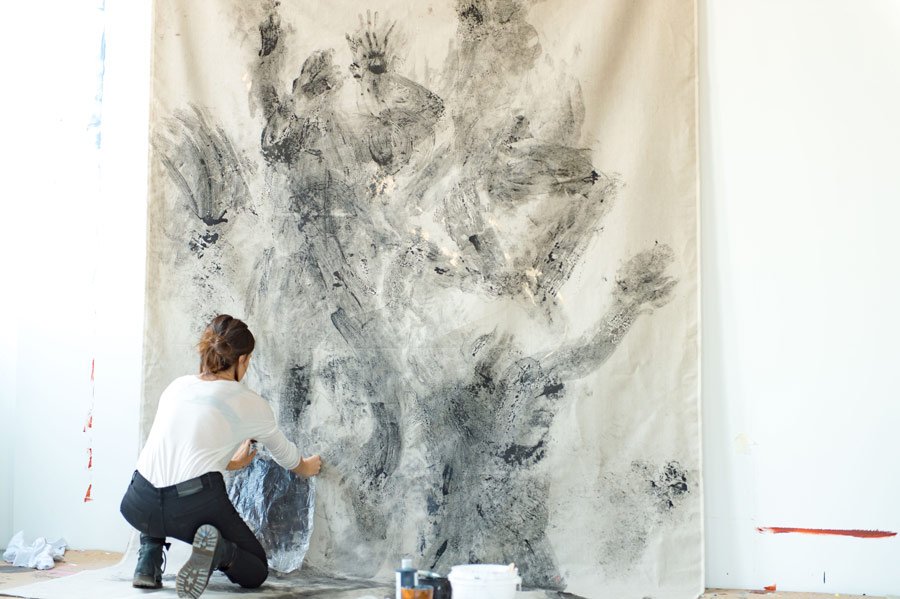 VERDIANA PATACCHINI THE BRIGHT SIDE OF THE WOMB Curated by Martina Cavallarin Opening Thursday 11 October 2018, 6:30 PM Galleria EMMEOTTO – Palazzo Taverna Via di Monte Giordano, 36 – 00186 Roma 12 October – 30 November 2018 On October 11th 2018 at 6:30 PM, the first one-woman exhibition of Verdiana Patacchini entitled The Bright Side of the Womb will open at Galleria Emmeotto in Palazzo Taverna in Rome. The artist lives and works in New York with her studio in MANA Contemporary, a flourishing creative community, founded in 2011 and among the most innovative contemporary art realities in the United States, with many artists in many disciplines. MANA gives life to a plural and participated cohabitation that promotes experimentation, collaboration and reciprocal inspiration and it is in this stimulating and vibrant context that Verdiana Patacchini has created her works over the last few years. Her work is a heterogeneous composition of analysis, research and experimentation with a variety of materials. In it she confronts the themes of metamorphosis, imperfection, our link with the earth, protagonists of a linguistic game concerning the past and a primitive vision of the world, the result of a study rich in references and citations she has re-elaborated until she has made them her own, through an investigation of the quality of stroke, colour and material. Her passion for ancient statues, primitive graffiti and Pompeian frescoes are the touchstones of her expressive code and artistic research as she elaborates with her personal poetics to attempt to trick into existence an eternal dimension to the fragility of human life. The artist considers the “bucranium”, often depicted in Greek and Roman art, as a primitive representation of the femininity and sexuality of a woman’s womb and a symbol of fecundity and maternity. The works in the exhibition are a complete representation of her plurality of languages suspended between history and contemporaneity, her search for materials and her modus operandi as she seeks to create harmony within the exhibition space and its form. The works are large linen canvases bearing primitivist and emblematic signs, left free to fluctuate in the rooms, ceramic sculptures and a face created with white neon light. The materials used in realising the works, as she re-elaborates artistic techniques of antiquity using a contemporary approach, are: raw linen, ceramic, ink, oil, graphite, Japanese raku, fire, stone from an Umbrian quarry – the land from which the artist came – baked clay, acrylic and ink on plastic. “Pervasively elegant,” as Martina Cavallarin writes in her critical text of the exhibition, “her works, thanks to and notwithstanding their complexity and ingenuity in their formal relationship and the variety of materials, reach an extraordinary unity in their impact and liberating possibilities of expansion. These structures act on the spectator and spatial environment with great vigor. Endowed with a structural aesthetic and representative form, the works are charged with tension, illusionism, emphasis and irony. Classicizing design, technical skill, manual ability and gestuality, aspects of the obsession with artistic and cultural inclination as well as characterial attitude innate in all poetics. Her research is conceived as a project in which similarity is consciously accepted, to affirm the differences, a place where things show their most innocent aspect and the allowing of a sign to express itself means affirming one’s specific originality. Verdiana Patacchini has no intention of interrogating history through her works, though they are lucidly and clearly steeped in it, but rather the anthropologic nature of the collectivity, acting on the atavistic fears that constitute the primary node of existence, Time and Life.” Verdiana Patacchini, AKA Virdi was born in Orvieto in 1984. She graduated in painting from the Accademia di Belle Arti on Via di Ripetta in Rome with a thesis on Carlo Guarienti, whose student she became. Successively she graduated in Communication and Valorization of Contemporary Artistic Heritage. In 2011 she exhibited at the 54th Venice Biennial Exhibition of Art in the Italian pavilion. She has travelled around the United States since 2009. In 2012 she obtained the first artistic visa and in 2015 she was awarded artistic residence and she moved to New York. In 2016 the Italian Consulate General in New York held a one-woman exhibition curated by Galleria Emmeotto in Rome. Currently Verdiana lives in New York. Her studio is number 312 at MANA Contemporary. She signs her works with the nickname Virdi.