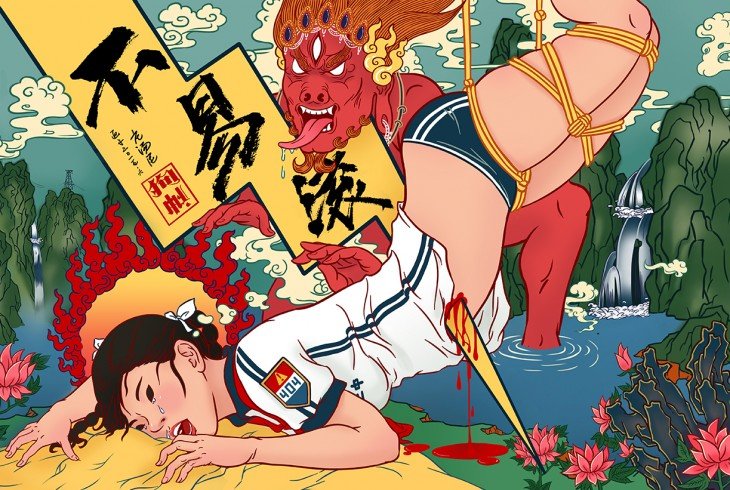 Nero Gallery is pleased to present "Eastern Palace For Pleasure", the first personal exhibition by Chinese artist Tony Cheung, edited by Giulia Capogna and Daphnée Thibaud, from September 23 to November 4.

Tony Cheung, class '87, is an illustrator and designer of Guangzhou, a city in Southern China commonly known as Canton.
In 2011 he graduates from the Guangzhou Academy of Fine Arts (GAFA) and begins his artistic career with the "Sensitive Words" project. This project was born in 2008 and investigates the subject of Chinese censorship, using the keywords that allow the Beijing government's network filtering mechanism to systematically detect unwelcome discussions about politically sensitive issues, which are finally filtered and censored.
This barrage begins since 2008, a year of strong changes for modern China: the earthquake involving a large part of the country with many deaths, Westernization, Olympic games and Facebook and Youtube censorship for fear of the Chinese government of a revolution like the Jasmin Revolution in Tunisia.
China is now one of the world's greatest superpowers, but there are infinite contradictions within it, one of the most obvious is the coexistence between ancient culture and Chinese education and the new industrialization and globalization. These contradictions are the basis of Tony's illustrations, which reinterpret some characters and aspects of Chinese society in ironic and satirical terms.
Mao, Stalin, Marx are transformed, made new and bizarre and at the same time iconic, using a style that blends American pop culture between the '50s and' 60s, manga and dictatorial culture up to touch upon classical art Japanese.
The colors are strong as well as the images that contain eroticism and sensuality together with a strong satirical vein.
Tony, who still lives and works in China, where control of the authorities is still very strong, gives us a cue for interpreting his work ethically. The Chinese Taoist philosophy of WuWei (action without action) develops a concept of "emptiness" as a way to reach the cosmic order and inner peace. For Taoism, excellent action is what is achieved in the absence of motives and in the void of purpose, leaving each action to be produced by following its own spontaneous nature. Man therefore does not have to aspire to actions that are too big and complex, but he must keep in harmony with nature so that the world follows its natural evolution.
Likewise, Tony doesn't call himself an activist, his work is an expression of his vision that must let the spectator be able to reflect independently. 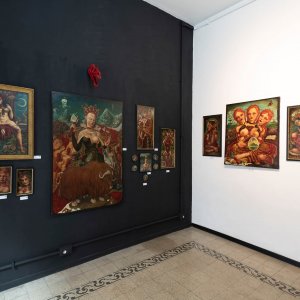