Since the '90s, she has been focusing on the research and refinement of different artistic techniques: fresco, oil painting, drawing, etching, sculpture, photography, and video. With a nomadic gaze, the multifaceted and multi-material artist finds in the physical and mental journey, intended as evocative freedom but also as detachment, the surreal exile from daily life. Art as a synonym and extension of the concept of metaphysical journey, explored through different series of works. After a stay in New York, she exhibited "L'estate Indiana" ("Indian Summer") in Milan, where she included photography. In 2000, she returned to drawing and to the human figure, recurring in her work. Since 2004, through embroidery she has been conceptually working on the idea of "mending" the past with the present, interweaving her inner and outer world, in which personal experiences recount stories caught between imagination and reality. Her works on linen, including vintage photographs on which she intervenes with embroidery, painting and pins, have been exhibited at the "Fotografia italiana" gallery in Milan. In 2007, she exhibited in London, Hamburg, and Zurich the series Mondo Perfetto (“Perfect World”, painting and photography). The works on the body and urban landscapes, surreal and apocalyptic, are presented by the Guastalla gallery and the Catella Foundation in Milan in the exhibition "Futuro Anteriore" (“Future Perfect”, 2011), inspired by her journey to the Svalbard Islands (Norway) to see the Global Seed Vault, a giant Noah's ark that collects seeds from around the world, preserving the universal seed heritage from accidental botanical loss. In this series of works, she introduces in a video the theme of the metamorphosis of a seed that becomes a woman and then a tree. In 2009, she took part in the Biennale in Mantua. In her latest works, she adds civil commitment to the theme of the journey, seeking an ethical response with works dealing with environmental catastrophe, in which the tree becomes the symbol of a lost naturalness. This is demonstrated by the "Bosco di Domani" (“Woods of Tomorrow”), the site-specific work, hosted in the international gate of Malpensa airport (2016), consisting of 14 large canvases/tapestries.  In 2017, she intervenes on a public space with the work "Città di domani" (“City of Tomorrow”), created on the fencing of the construction site of metro line 4 in Milan. The relationship between natural and artificial, the hybridization between man and nature, the community and the environment that hosts it, and the fragility of the ecosystem caused by man: these are her recurrent themes against the exploitation of natural resources, which she explores through different techniques and formal solutions, in which the relationship between architecture and nature as a determining factor for the future of the human species is central. This ethic-ecologist turn leads her to investigate themes about the complexity of the Anthropocene. Her need to deal with urgent issues culminates in the works “Le immagini affamate” (The hungry Images”), displayed at the Archaeological Museum of Aosta.

A symbol of sustainability and environmental regeneration in a critical and poetic way, the tree is also presented at the Museum of Trento (2013). In 2019, a private gallery in Ferrara unveiled the "De-Sidera" series of works, inspired by the frescoes of Palazzo Schifanoia, where literature, myth, astrology, and cosmology intertwine. Her works are on display at the Idroscalo Art Park and at Palazzo Lombardia, both in Milan. 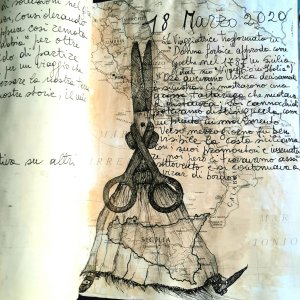 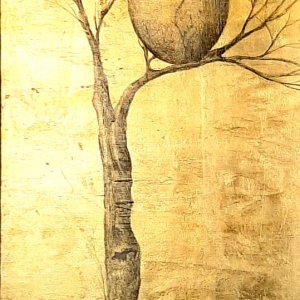 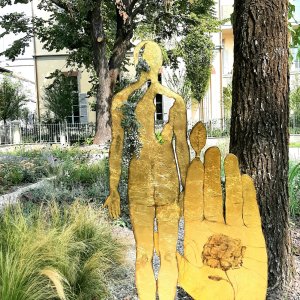 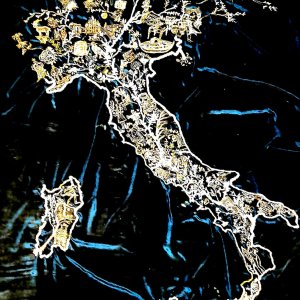