Born in Rome, where she lives and works, Francesca Tulli has a Degree in Sculpture from the Academy of Fine Art in Rome. She has exhibited in private galleries and public institutions throughout Italy and in Beijing, Boston, Buenos Aires, Geneva, Helsinki, Sydney, Ubud and beyond.

Regular solo shows have been held at Galleria Maniero in Rome, Galerie Bins &amp; Kramer in Cologne and Lipanjepuntin Artecontemporanea in Trieste. In 2018 her work “UMANA NATURA” was placed in the SCULTURE IN CAMPO Park in Bassano in Teverina (VT) and in 2021 two personal exhibitions, “Mutanti” at the KOU gallery in Rome, and “Sculture” in the Municipal Park of Latina, were inaugurated.
Her work has been featured in the exibition “Altre opere – Artisti che collezionano Artisti” in Rome, in the Napoleonic Museum (2021) and in the Bilotti Museum (2020), the Italian Pavilion at the 54th Venice Biennale (2011), Premio Fabbri at the Villa delle Rose (MAMBO), Bologna (2009), “Sguardo Trasversale”, Kolnisches Stadtmuseum, Cologne and the XII Quadriennale di Roma (1996) and included in the collections of BNL – Paribas, Banca d’Italia, Comune di Latina and Galleria Comunale di Arte Moderna, Rome.
Francesca Tulli’s paintings and sculptures have developed as parallel practices, linked by her personal interpretation of a complex and visionary realism, balanced between the naturalistic and the surreal. Her paintings, in black-and-white or in audacious color, often depict lush domestic interiors which are seemingly comfortable, yet due to their tilted perspectives and ambiguous viewpoints, become strangely unsettling.

Her recent canvases show patterned rugs which appear to be moved by subterranean forces or mysteriously sucked into vortexes. In her sculptures, the artist’s elongated
figures are posed in dynamic equilibrium, sometimes malformed or “mutated”, or existing in dialogue with each other. Made from terracotta and bronze, her figures shift between classical and futuristic, integrated with different materials including rusty steel, photographs, sand and led-lights. Their faces are expressionless. They are beings which are simultaneously familiar and other-worldly, lost in their own profound thoughts but at the same time searching for their role as part of the bigger picture. 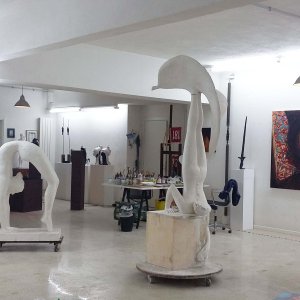