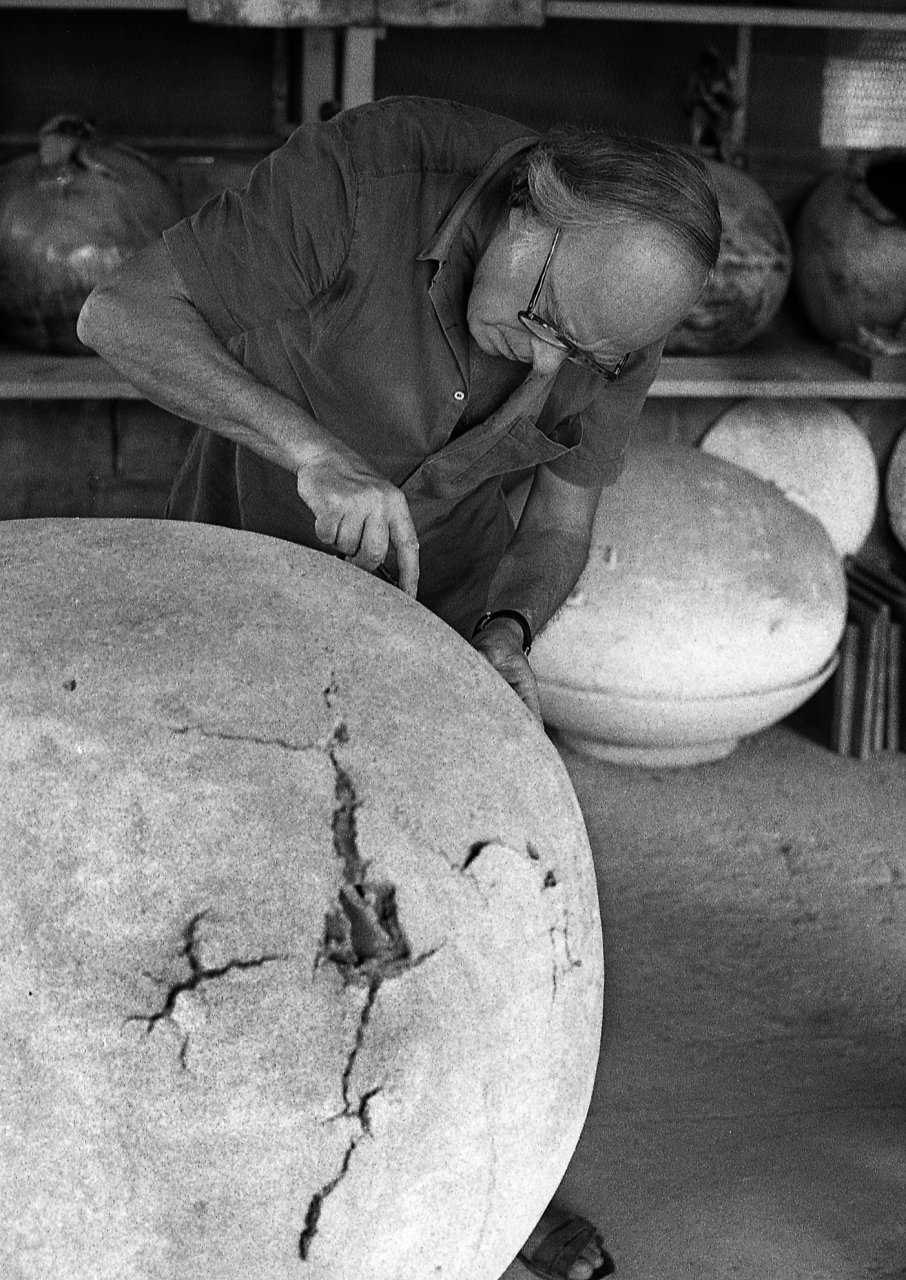 His initial contacts with ceramics took place in his father's refractory factory, where he made his first artifacts.

Towards the end of the 1940s he began studying ceramics, drawing and sculpture in Buenos Aires.

In 1954 he was one of the founders of Artesanos, the first avant-garde group in post-war Argentine artistic ceramics and in 1959 of the Centro d'Arte Ceramico Argentino.

He exhibited his works in Brussels, Prague and Italy where he settled in 1963 and decided to devote himself exclusively to sculpture. He worked for about a year in the ceramic center of Vietri sul Mare (Salerno) and in 1966 he moved to Albissola Marina, where he met the major artistic personalities who stayed there and in particular Wifredo Lam.

He travels and works in France, Germany, Holland and Denmark.

He is appointed member of the International Academy of Ceramics in Geneva. In 1973 he moved permanently to Albissola.

In 1974 he was awarded at the XXXII International Competition of Faenza and received the Grand Prix at the V International Biennial of Ceramique d'Art in Vallauris.

In 1980 he made his first trip to Japan as a guest of the International Academy of Ceramics in Kyoto.

In 1985 he exhibited at the Hetjens Museum in Dusseldorf and at the Museo de Ceramica in Barcelona.

In the following years he participated in numerous exhibitions in South America and Europe. In 1991 he obtained the Grand Prix at the XXXI Suzzara Prize (MN). In 1992 he participated with some works in the traveling collective organized by the Kyushu Museum in Japan. In 1993 the city of Savona dedicated a retrospective to him at the Priamar Fortress.

In 1996 he exhibited at the Saga Prefectural Art Museum in Japan and returned two years later invited for the Shigaraki Ceramic Cultural Park to create a monumental sculpture for the city museum. In 1997 he received the Career Oscar from the Municipality of Albissola Marina.

In 2000 the city of Padua, as part of the fourth edition of Scultura all'Aperto, hosted a personal exhibition of his; receives from the Municipality of Barge (CN), the town of origin of his ancestors, the Honorary Citizenship and realizes the monument "Megaliths for Barge".

In 2005 he was invited to exhibit with Laura Vegas at the Roccavignale Castle (Savona) and in the Palazzo Ducale in Genoa, and the “Homage to Carlè” was ordered.

In 2007 he was invited to the “Concreta” exhibition in the Palazzo Pretorio in Certaldo (FI).

In 2008 he exhibited in the Cloisters of Santa Caterina in Finale Ligure (SV); in October of the same year, the Circle of Artists of Albissola Marina pays homage to Carlos Carlè on the occasion of his eightieth birthday, with a personal exhibition in the Civic Art Gallery of Savona.

In 2008 he was awarded the international "Journey through Ceramics" Award for having worked significantly in Vietri sul Mare in the 1960s, at the Solimene Artistic Ceramics Manufactory.
In 2009 he was granted Italian citizenship and during the same year the Noble Contrada del Nicchio di Siena paid him a solemn homage.

In 2011 he exhibited in the Palazzo della Meridiana in Genoa as part of the Special initiative of the 150th anniversary of the Unification of Italy promoted by the Italian Pavilion at the 54th International Art Exhibition of the Venice Biennale.

In 2012 he exhibited at the Galerie Elvire Gardonne (Vallauris).

In 2014 he participated in "Artists of the East and of the West" Nobile Contrada del Nicchio Siena.

In 2015 he participated in the historic exhibition "The Contemporary Italian Ceramic Sculpture" at the National Gallery of Modern Art in ROME.

In the same year he took part in the "La Ciotola Come Metafora" Festival in Siena - organized by the Noble Contrada del Nicchio Arte dei Vasai.

He died in Savona on April 9, 2015; rests in the cemetery of Albissola Marina (SV), an ancient land of ceramics.

His works are present in numerous museums and collections, including:

- Civic Museum at the Eremitani, Padua