Vittorio Paradisi was born in Lecce in 1934. He lives and works in Rome.

His first personal exhibition was held in 1962 at the Eugenio Maccagnani gallery in Lecce. He has set up more than seventy personal exhibitions and participated in over a thousand national and international competitions and prizes.
Since 1959 he has taught Painting Decoration at the State Art Institute of Lecce and since 1971 Painting Disciplines at the II State Art School of Rome. In 1982 the anthological volume of graphics and paintings was published for the Cerroni editions of Rome. He has created several sacred works, including: Parish of St. Anthony in Lecce, ten oil panels inspired by the Canticle of the Creatures of St. Francis of Assisi; Convent of St. Francis of Assisi in Lequile (Le) , five oil lunettes with stories of the Saint; Chapel of the church of Santa Maria delle Grazie, Merine (Le), oil painting depicting an angel; Pro Arte Deo Art Gallery, Monteroni di Lecce (Le), oil painting depicting Ecce Homo. At public bodies of Lecce: an embossed and chiseled copper panel of m. 2.50 x 4 on the facade of the Dante Alighieri middle school; pictorial works at the Liceo Classico; To the Press Association; To the Franciscan Art Gallery; To the Banca del Salento; At the Pinacoteca Fathers Passionists in Novoli (Le); at the “Vito Mele” Museum in Santa Maria di Leuca (Le); the “S.Castromediano” Provincial Museum. Other works at the Sondrio Chamber of Commerce, the Municipality of Assisi, the Royal Palace of Riyadh (Saudi Arabia), the Fatebene Fratelli Hospital in Rome, Interforze in Rome (Sale Paradisi), Citibank in Milan, the Quirinal Palace in Rome, the Pontificium Consilium de Iustitia et Pace Vatican City, Lions Club of Rivoli (To), the Municipality of Argos (Greece), the Provincial Command of the Carabinieri of Rome, the Municipality of Ardea (Rm), the Archaeological Museum Lavinium of Pratica di Mare, Provincial Museum of S. Castromediano of Lecce. In 2003, presented by Italo Marucci, the monographic volume “Vittorio Paradisi, my Rome”, Edizioni Chirizzi. His works are in prestigious private collections in different parts of the world. 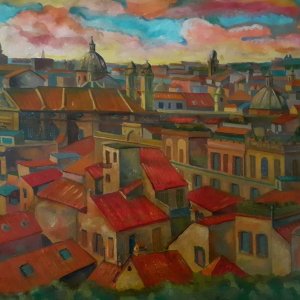 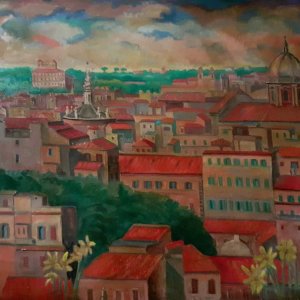 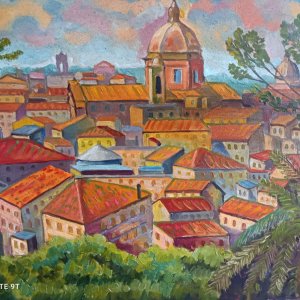 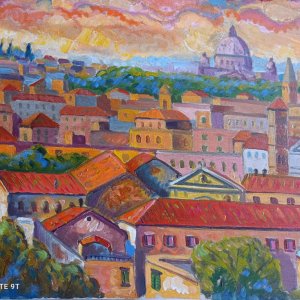 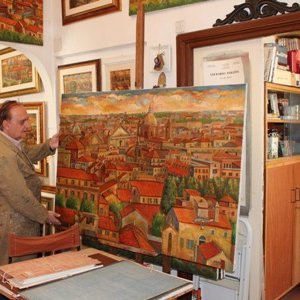