Simulation Imitation of a situation or process. The action of pretending; decept

Simulation
Imitation of a situation or process. The action of pretending; deception. The production of a computer model of something.
Simulation is a group exhibition featuring works by Joaquin Margulis, Charlie Masson, and Bianca Millan. The artists draw inspiration from the mundane of everyday life as a means to question the ends of today's social habits.
Though each artist's work may vary in medium and content, together they form a contemporary narrative with Orwellian themes, asking the viewer to reconsider the superficial, all the while embracing a deliberate aesthetic. Suggestive of the illusory, the title ponders contemporary society's inclination to find a substitute for reality.
In 1937 Lewis Mumford defined the urban environment as the ‘theatre for social action’ and a ‘stage to create drama’, to enable meaningful human interaction. Nowadays, the urban environment has expanded its borders into a global condominium, becoming the enlarged stage for globalized social action and Anthropogenic drama.
Using GPS technologies, Bianca Millan has been collecting data on her individual movements since 2016. Her research investigates the meanings embedded in those traces, their potential reading as a language, their aesthetics resulting from the combination of human action and satellite technology. The “CLOUD” contains 365 photographic prints elaborated with enamel paint and acids. The artist decided to erase or alienate the GPS tracks from their context, as to create a final landscape emerging as a new entity from the singular satellite landscapes. The installation of the CLOUD has a playful side, using helium balloons to create movement and 3D perspective as the prints hang in groups suspended and connected by transparent fishing wire. The work seeks to create a sense of fragmented theatricality, where the individual performance of life happens on a global/digital stage, where the effort of self- representation and documentation results into clouds, balloons and new landscapes.
“Digital Landscape” depicts a landscape of several layers, a bottom water-based field of connectivity realized using water tension, that creates the ground for GPS layers of tracks to emerge or reside on the canvas. The pink spider-web looking material is based on GPS recorded data of Bianca Millan’s movements in Rome, throughout a year (June 2018 - June 2019). Windows and digital icons also emerge in a light pink presence, creating a dynamic and never stable picture.
The phenomena and cognizance of self-created online personas are the focus of Charlie Masson's "Avatar" series. The artist seeks to immortalize his friends' intangible virtual profile pictures as intimate portrait keepsakes. Self-expression and the addictive quality of modern day voyeurism are encouraged through social media. The pleasure of creating a virtual 'reality' while peeping into semi- private lives has become accepted as the norm. Strangers tap into psychological aspects exploited by virtual design. Masson brings to light this virtual void, uninhabited by physical contact or palpable relationships. He follows the age-old practice of painting to effectively communicate the present. Purposefully using oil as the medium to present this series, Masson remixes still life using social media as the new live model.
The routine life propelled by the social media machine is what motivates Joaquin Margulis to create his sound sculptures and paintings. The artist believes that sound is a powerful medium, as hearing is the most constant of the senses. Even silence is a sound. For the fourth installation of his “Sound of Routine” project, the artist has likened today's fast culture of convenience to the microwave; a vehicle for instant, thoughtless gratification. Margulis draws inspiration from the mechanisms of the microwave, readapting its concealed chaos: radio wave frequencies and interference, rhythm structure and motor applications, such as the plate-spinner. The resulting sound sculptures create a clamor in reaction to habits that oppose the natural pace of natural human life. On the other hand, the artist’s paintings seek to reflect the dichotomy between natural order and systematized reactions through straight lines and geometry overlaid on freehand backgrounds.

Joaquin Margulis (b. 1990, Santiago, Chile) left his studies of architecture behind in order to pursue an education in fine art. He received the honor of Maximum Distinction in Sculpture upon graduating from Escuela de Artes Visuales de la Universidad Finisterrae de Chile in 2017. His work has been exhibited internationally in Goa, Madrid, Vienna, Berlin and Santiago. Simulation is the artist's first exhibition in Rome.
Charlie Masson (b. 1987, New York, USA) received a BFA from the School of the Art Institute of Chicago in 2009. He continued his education at The Royal Drawing School in London and Camberwell College of Arts, where he completed his MA in Printmaking and graduated with distinction in 2012. Work by the artist is represented in private collections internationally. Masson currently lives and works in Capalbio, where he is also involved in the development of the artist residency program Treeline.
Bianca Millan (b. 1992, Milan, Italy) is currently based in Palermo. Her research focuses on movement and GPS technologies, in an ongoing collection of tracking data which started in 2016. Bianca has pursued an academic career in international relations, journalism, and Middle-Eastern politics while developing a self-taught artistic practice. Recently Bianca has taken part in international intensive art programs including LungA School and Scuola Gibel.
“Technological progress has merely provided us with more efficient means for going backwards.” - Aldous Huxley 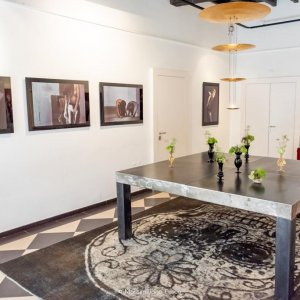