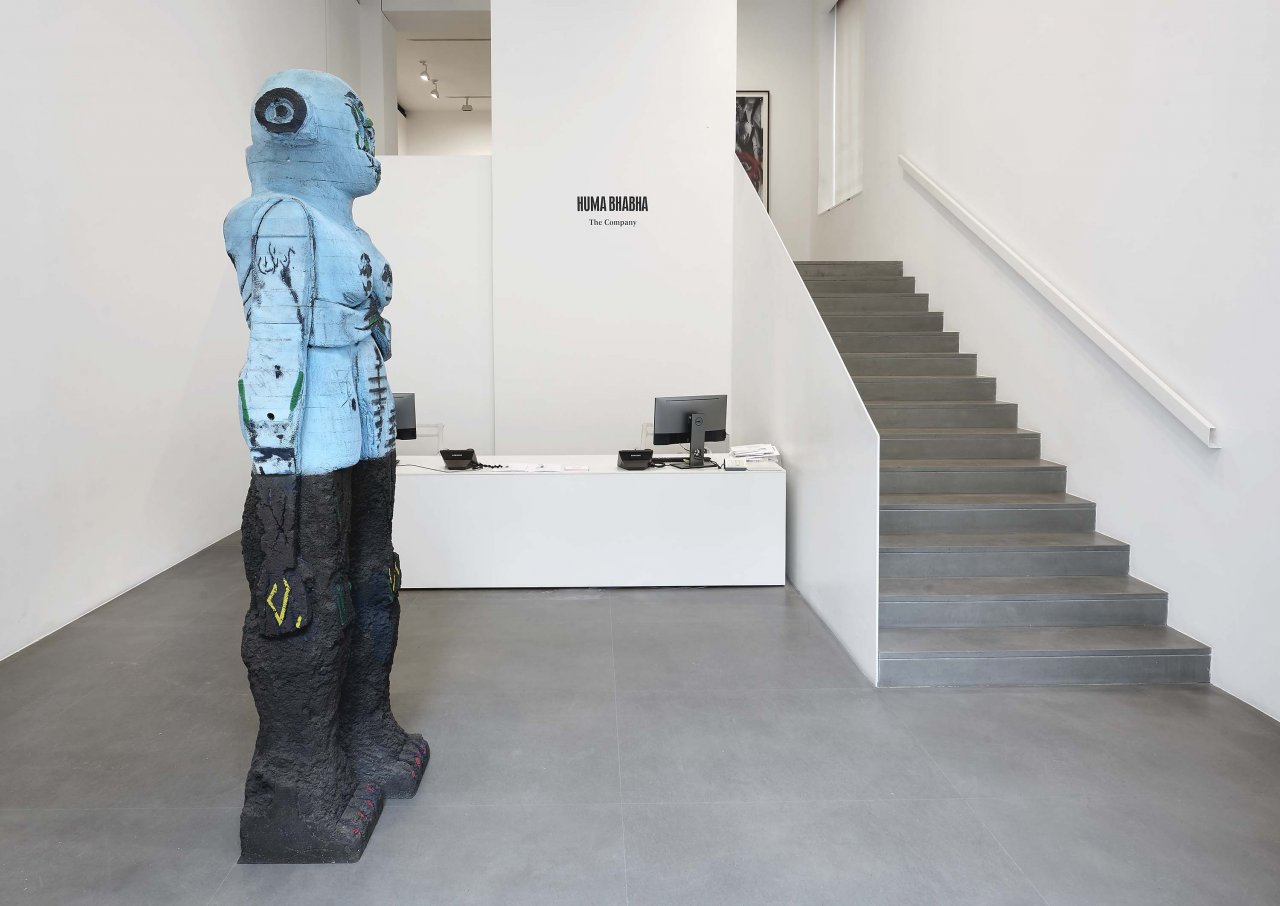 Gagosian is pleased to present The Company, new sculptures and drawings by Huma Bhabha. This is her first exhibition in Rome.

In expressive drawings on photographs as well as figurative sculptures carved from cork and Styrofoam, assembled from refuse and clay, or cast in bronze, Bhabha probes the tensions between time, memory, and displacement. References to science-fiction, archeological ruins, Roman antiquities, and postwar abstraction combine as she transforms the human figure into grimacing totems that are both unsettling and darkly humorous.

The Company is inspired in part by “The Lottery in Babylon” (1941), a short story by Jorge Luis Borges in whicha fictional society is taken over by a pervasive lottery system that doles out both rewards and punishments. The lottery is purportedly run by the Company, a secret, perhaps nonexistent body determining peoples’ fates. Bhabha’s procession of sculptures makes visible the power of this unseen Company. It comprises a pair of large, disembodied hands floating atop transparent plinths; a seated figure; and several standing figures of varying scale. Drawings on photographs echo these forms and characters, which could have come from a distant realm of the future just as easily as from a lost civilization. The standing figures are carved from stacks of dark cork—which emits an earthy, acrid odor—and its technical inverse, Styrofoam. These materials appear to be hard and dense, like eroded stone or freshly quarried marble, but they are lightweight and soft, allowing Bhabha to carve quickly and spontaneously without over-refining. The sculptural process thus becomes a sort of embodied stream of consciousness from which alien monsters, fertility goddesses, and Greek kouroi emerge.

The masklike visages of Bhabha’s sculptures are at once majestic and jarring. Painted in incongruous pastel tones—blue, mauve, pink, and green—they recall graffiti, where urban grime combines with interventions of glowing color. With their deranged, cartoonish features empowered by a foreboding bipedalism, Bhabha’s sculptures seem to both mock and warn as reflections of and witnesses to human pride and power, veneration and iconoclasm. Pairing the scars of war, colonialism, and trauma with allusions to current events and popular media, Bhabha has long maintained that the world is an apocalypse, both man-made and natural; her ravaged sculptures appear to have witnessed some measure of catastrophe yet survived to tell the tale. Like an enthroned pharaoh or cyborg caught in a shower of shrapnel, a seated figure is assembled from sallow clay pressed into chicken wire, mottled fragments of Styrofoam, toy dog bones, and rusted chairs from Bhabha’s hometown of Karachi, caught in the crossfire of internecine and international conflict.

In Bhabha’s large drawings, human and nonhuman figures occupy the intersection of photography, collage, and painterly gesture—their composite faces and shadowy forms seeming to haunt landscapes, city streets, and architectural settings. In one, a blue and beige arch is imposed on Bhabha’s own photograph of an ancient dog statue in Rome’s Musei Capitolini, with two white kouroi looming in the background.

On the occasion of the exhibition, the Galleria Nazionale d’Arte Moderna e Contemporanea in Rome hosted a conversation between Bhabha and Cristiana Perrella, director of the Centro per l’arte contemporanea Luigi Pecci in Prato, on September 18.